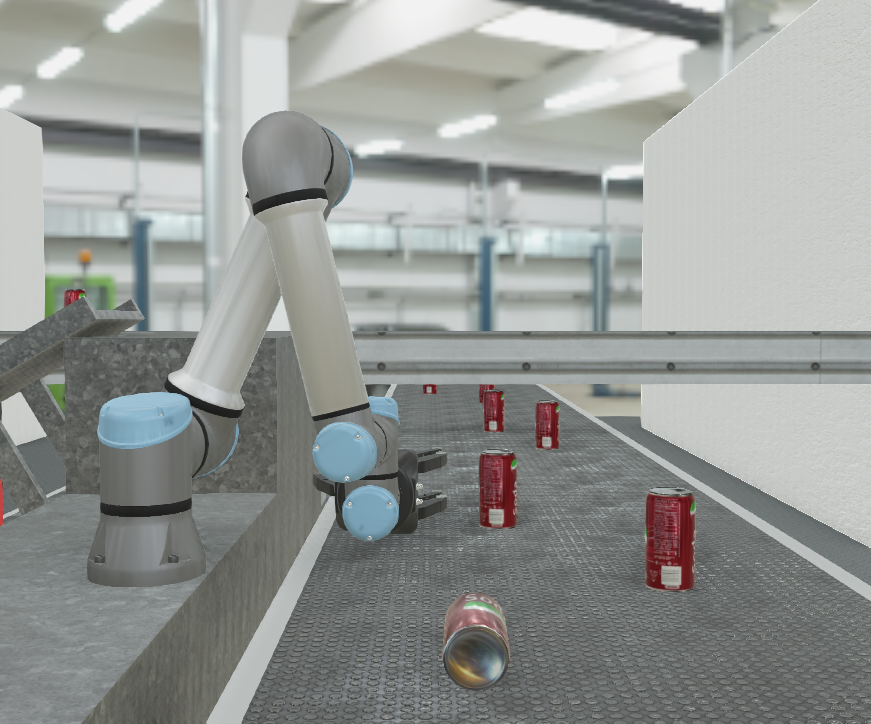 The goal of this lab is to implement inverse kinematics and trajectory control for the UR5e robot, mimicking the built-in functions “MoveJ” and “MoveL” of the UR robot. “MoveJ” implements inverse kinematics (IK) and moves the robot in joint space. “MoveL” also solves the IK problem, but lets the robot move in Cartesian space. This requires to compute waypoints in Cartesian space, solving the IK problem for each of them, and then moving the robots along them. As a “collaborative” robot, the UR robot also implements some low-level safety feature. The user can specify multiple planes that no part of the robot will cross.

A UR5e robot is positioned to be able to collect beverage cans that are presented on a conveyor belt. The robot is positioned such that it can reach the entire width of the conveyor belt, allowing it to capture cans no matter where they are on the conveyor belt. The goal of this lab is to implement the motion primitives that are necessary to move the robot appropriately. This lab needs to be implemented in three steps. First, implement all the tooling that allows Webots to read the robot’s joints and set them. Second, implement the forward kinematics of the robot to obtain it’s actual position as well as the position of all its joint. Finally, implement a basic IK solver that computes the target joint angles for a given pose. You will need to implement a loop that waits until the robot is close to the desired location. This will be your “MoveJ” command. Second, generate a trajectory that allows the robot to approximately move on a line between two points using “MoveJ”. This time, draw the next waypoint as soon as the robot is close enough. This will be your “MoveL” command.

This is a 3-week lab. Plan for satisfying the “preliminaries” in Week 1, implementing the MoveJ command in Week 2, and implementing MoveL in Week 3.

Inspect the Webots world and think about the motions that would be necessary to captur`e every can on the conveyor belt. What would happen if the robot would be allowed to move to these positions any way it wants? Why would you need only commands like MoveJ, but also MoveL?

How many solutions will you possibly get to achieve the same pose using a six degree-of-freedom robot?

Think about how you would implement a function that checks whether a set of joint angles is allowable or not. Is it sufficient to simply specify a range for each joint? Why not? Consult the UR5e manual to find out how a user can specify “keep out” zones.

Hint: unlike other objects in the environment, the robot will not fall (due to the parameter “staticBase” set to TRUE). You can therefore delete all the objects that are in its way (as well as lift it a little bit) to observe how illegal motions do look like when fully executed.

Note: You can use the orientation of the robot at the beginning of the motion and stick to it.

If you are using Jupyter lab, you can use the following commands to turn your notebook into a stand alone controller:

This assumes that your notebook is called “ik_solver.ipynb” and will create a script “ik_solver.py”